iCo Therapeutics owns the worldwide exclusive rights to iCo-009, an oral reformulation of Amphotericin B for sight and life threatening diseases. iCo-009 also represents a new drug delivery technology with the potential to reprofile other IV administered drugs to the oral route of administration. 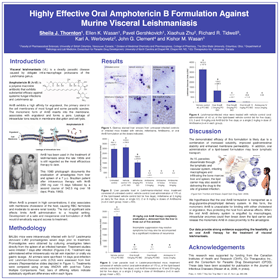 Amphotericin B (AmpB), the gold standard for systemic antifungal drugs, is one example of a well established, highly efficacious systemic antifungal drug that has a 50 year history of intravenous therapy. AmpB formulated as a micellar dispersion (Fungizone®; FZ) for IV use, remains one of the most effective agents in the treatment of systemic fungal infections, yet no oral formulations are currently commercially available.

The ability to allow patients to self administer treatment for systemic fungal infections would significantly increase the quality of life in developed nations, where the rates of opportunistic fungal infections such as candidiasis, histoplasmosis and aspergillosis are climbing, particularly within patients with cancer, organ transplant recipients, diabetics and HIV/AIDS.

In developing nations, the need for oral therapies is not a matter of convenience or cost, but instead is one of survival. The benefit of developing oral therapies is illustrated by the protozoan Leishmania donovani, an insidious parasite that is transmitted by the bite of an infected sand fly that affects over 200 million people from 62 countries.

The laboratory of Dr. Kishor Wasan of the University of British Columbia has made significant strides toward the development of a proprietary, lipid-based AmpB formulation for oral administration. Initial data from both cell lines and in vivo research indicate that it is highly efficacious and exhibits low toxicity within the dosage range required for the treatment of diseases such as disseminated fungal infections and leishmaniasis. Additional studies are underway to optimize the formulation.

iCo-009 has been granted Orphan Drug status for the treatment of Visceral Leishmaniasis (VL) by the US Food and Drug Administration (FDA).